Any wheelset that’s 80mm deep like the latest tubeless, disc-brake Zipp 808 Firecrest is going to have an intensely focused mission. Speed!

Your wheels play an important role on the track or in a time trial or triathlon or any ride on a course that has a similar profile where pure speed matters more than shrewd strategy. While not as important as your physiology, fitness, or body position, wheels are one of the equipment choices that matter most along with your bike, clothing, helmet, bars, and tires.

And when deciding between wheels for these events, aero drag plays the most important role compared to other considerations including stiffness, weight, comfort, and rolling resistance.

Differences in TT and triathlon courses can and often change how well a given wheelset performs for you. Some courses are quite flat while others have rollers or a key climb. Some are relatively straight while others have a lot of turns that can make it quite technical. Regardless of the terrain and turns, some TTs and triathlons fall on days with little to no wind while others happen in places or at times when there’s always some wind to contend with.

I’m not a triathlete, TT racer, or trackie. And while I like to ride fast, I’m not worthy of a wheelset like the Zipp 808 Firecrest which hits its stride around 25mph/40kph

Fortunately, my fellow testers Nate and Miles are fast, worthy riders. Nate leads a weekly Bullet Train group ride that averages in that mid-twenties, early-forties speed range and has done his share of individual and team time trials. Miles is a regular P/1/2 and masters racer who competes regionally and nationally in crits and stage races that include time trials.

They both know high-speed riding and racing as well as more tactical road racing on flats, hills, and climbs. They each tested the Zipp 808 Firecrests on a variety of fast rides and races. I’ve captured their feedback here. 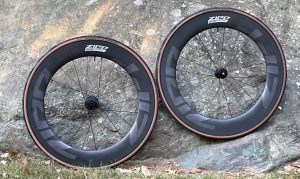 With the Zipp 808 Firecrest beneath you, you almost immediately feel the wheels holding your speed on the flats even before getting up to race pace. They seem to just roll without too much effort. And once you are cranking in the big gear at aero speeds, they feel like a steamroller. They just go.

But do they roll any faster than a 60-65mm deep aero wheelset in a race or fast ride? Perhaps, but the 808 Firecrest don’t feel like they are dramatically more aero or hold higher speeds with less effort the way going from a 40-45mm all-around to a 60-65mm deep aero set of hoops does.

Nate rode the same time trial with the 808s on his Specialized Venge aero bike and a shallower set of wheels on his more road race-oriented Specialized Tarmac. He finished with essentially the same time at the same average power.

While it’s tough to control for other factors (e.g. differences in temperature, humidity, wind, etc.) and with only two data points, it’s most likely that the rolling terrain of the course limited Nate’s ability to ride at a speed fast enough where the deeper Firecrest would make a difference.

This isn’t inconsistent with what wind tunnel testing of wheels of different depths has shown. It’s a cycling case of diminishing returns; aero drag reduction improvements get smaller as wheels get deeper or as testing speeds get lower. 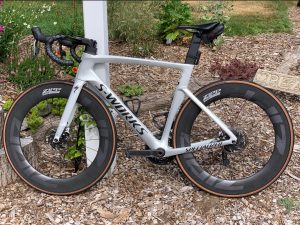 We used 28mm Continental Grand Prix 5000 S TR tubeless tires with sealant for all of our testing. That’s the width that Zipp recommends to optimize the 808 Firecrest’s aero performance and the tire that independent tests have found to have among the lowest rolling resistance of tubeless tires that use a puncture belt.

The wheels themselves measure 1673 grams on my scale including rim tape, valves, and an XDR freehub. Both the front and rear wheels average 23.3mm inside and 27.4mm maximum outside width measured at a half dozen places on each wheelset.

Aerodynamically, 28mm tires on 27.4mm width rims go against the rim-wider-than-the-tire principle. Inflated both to 60psi and 80psi (the latter pressure above the recommended ETRTO recommended 5 bar/72.5psi limit for hookless rims like the 808), four of the best tubeless tires with puncture belts I recommend come in between 29.7mm and 30.7mm wide per my measurements on these wheels. (The fifth isn’t made in 28mm width.)

So why use a 28mm tire instead of a 25mm one that would set up much narrower on the rim?

While we’ve ridden 25mm tires on the Zipp 404 Firecrest and Zipp 454 NSW wheelsets that have similar inside and outside width dimensions to the 808 Firecrest for just this reason, that was before Zipp published their hookless road tire compatibility chart.

And of the best tubeless tires with puncture belts that I recommend – Conti GP 5K S TR, Schwalbe Pro One TLE, Specialized S-Works Turbo RapidAir, Michelin Power Road TLR, and Veloflex Corsa Race TLR – only the 25mm size Schwalbe and Veloflex are noted as compatible with the 808 Firecrest and Zipp’s other 23mm inside with wheels on their chart.

With my calipers, both of the compatible 25mm tires measure essentially the same width as the outside dimension of the rim once mounted and inflated in the 60 to 80 psi range. 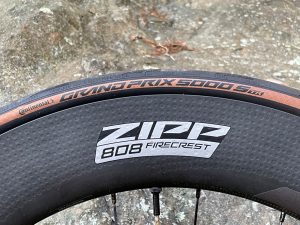 Additionally, parent SRAM’s tire pressure guide urges a rider heavier than 82kg/180lbs to go up to a tire wider than 25mm when using a tubeless, hookless wheelset like the 808 Firecrest

For the TT/Tri athlete willing to ride on race day with a tire that has lower tested tire loss rolling resistance but no puncture belt, only the 25mm Continental GP 5K TT Tdf passes the compatibility guideline.

Further, for my review of how wide wheels and tires can make you faster, I found that emerging yet incomplete research shows that the reduction in vibration-caused rolling resistance you get from a wider, less inflated tire can more than overcome the increase in aero drag caused by that same tire exceeding the rim’s width in situations where high aero speeds and less than perfect road surfaces are at play.

In our road testing, we found the 28mm Conti GP 5K S TR – Zipp 808 Firecrest combination quite comfortable on good and bad paved road surfaces. At a minimum, this didn’t dissuade Nate and Miles from slowing down the way a jittery ride might.

That same 28mm tire on a wider rim that measures wider than the tire would provide a reduction in both aero drag and vibration-created rolling resistance. As the Zipp 808 Firecrest rim width is what it is, it looks to me that you need to choose from a limited number of 25mm tires, ride good surfaces, and be a lighter rider that requires less inflation pressure to get that both the optimum low aero drag and rolling resistance.

Your ability to keep going fast is also affected by how your wheels react to winds coming from the side. If you get pushed off your line, you’ll be slowed by fighting back. And if you get pushed too much, you may back off the gas a touch (or more) out of your desire to stay upright.

In this context, the 808 Firecrest wheels performed well but within limits. They exhibit an almost “gyroscopic stability” that counteracts the sideways directional force from the winds to keep them in line. They want to roll in a straight line when you are going fast.

When it got quite windy, however, as in above 10 mph, Miles rather than the wheels had to do the work to keep the wheels tracking. With gusts above 15 mph, not an uncommon occurrence where we ride in New England, Miles had all he could do to keep himself upright. 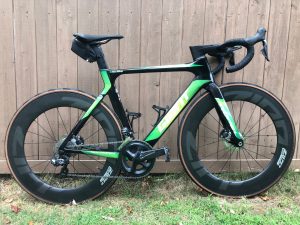 At times Miles rode his Giant Propel aero bike with his elbows on the tops in a time trial position. The wheels felt great when it was calm but any wind made him nervous. Admittedly, this effect would be lessened if he were using aero bars rather than the recently UCI-outlawed praying mantis or puppy paws position.

While Nate and Miles weigh in the 155-160lb/70-73kg range and aren’t dedicated time trial or triathlon riders, neither are immune to and both are experienced with riding and racing in a variety of road or weather conditions.

What came out in their experience riding the Zipp 808 Firecrest as compared to the many 60-65mm deep wheels we’ve also tested was the reduced maneuverability of these deeper wheels.

While the 808s are very stiff and reasonably light wheels given their depth, they don’t handle or respond to acceleration efforts as easily or quickly as their shallower aero wheelset competitors. The difference is noticeable on a parkour with a lot of turns and some climbing far more than the added speed you may get on a straighter, flatter course.

For these reasons, Miles passed on using the 808 Firecrest on the TT stage of the Green Mountain Stage Race and Nate preferred to use 60-65mm deep wheels on his Bullet Train rides. Both courses have more breeze, turns, and rollers than the boys thought the 808s would excel at. And neither would ride them in a crit – too many turns and a tick or two slower acceleration coming out of them regardless of the terrain or wind conditions.

This begs the question – would the lighter, scalloped 858 NSW that Zipp introduced at the same time as the 808 Firecrest be more suitable on a breezier, twistier, hillier course?

And would it be worth the 2X price you’d have to pay for it?

I’d only be speculating if I were to try to answer the first question and be substituting my value judgment for yours with a response to the second one.

What is pretty clear though is that the Zipp 808 Firecrest is best suited for flat, straight, and calm weather high-speed time trial or triathlon events and similar rides.

At US$2300, £2235, €2540, they’re a modest discount compared to the best 60-65mm deep aero wheels. If you race the kind of events we’ve found these wheels best suited for or are looking to start doing so, the Zipp 808 Firecrest would be worth considering.

You can find them at recommended store Bike-Components.

First published on September 19, 2022. The date of the most recent major update is shown at the top of the post.