I’ll admit to being a bit skeptical of the new Zipp 303 Firecrest Carbon Tubeless Disc Brake wheelset before I rode it.

I’d learned to love the unique combination of comfort and speed of the 303 NSW disc road wheels that Zipp sadly dropped from their line-up after introducing this new Firecrest. And the also new, low-priced 303 S (reviewed here) I tested before the Firecrest didn’t ride like any Zipp wheelset I’ve ever known.

So while I wasn’t sure what to expect, I feared that Zipp and their new more jagged looking logo might still be finding their way with this successor to the Firecrest franchise.

After riding this 303 Firecrest disc wheelset on enough paved flats, rollers, and alpine climbs, and a full range of gravel surfaces to get a bead on its character, I can tell you it is blazing a new Firecrest path.

And, for what it costs and what it does, I like that path.

At USD$1900 for a Firecrest, that path starts at a low price. With the $3200 Zipp 303 NSW disc now out of production (the other Zipp NSW rim and disc wheelsets remain), that price is not only the lowest it’s been for a Firecrest in, I think, ever, but it’s also now the price of their top-of-the-all-around-line disc wheelset.

Add to that, the 303 Firecrest disc is far wider (24.9mm inside, 30.0mm outside per my measurements), far lighter (1383 grams including pre-taped rims), and somewhat shallower (40.4mm) than previous Firecrests. Oh, and it only takes tubeless tires and has hookless rims.

So all that’s part of the new path, one that Zipp claims “is designed for the real world… a world of imperfect conditions, road surfaces, and elements”. In simpler words, it’s intended to be ridden on both paved and gravel roads.

For the most part, the Zipp 303 Firecrest disc pulls it off.

As a gravel bike wheelset, the 303 Firecrest is the full package. It’s comfortable and confident, or at least makes me feel that way on any class of surface. Negotiating around rocks, ruts, branches, in and out of lines, this wheelset is nimble and responsive. 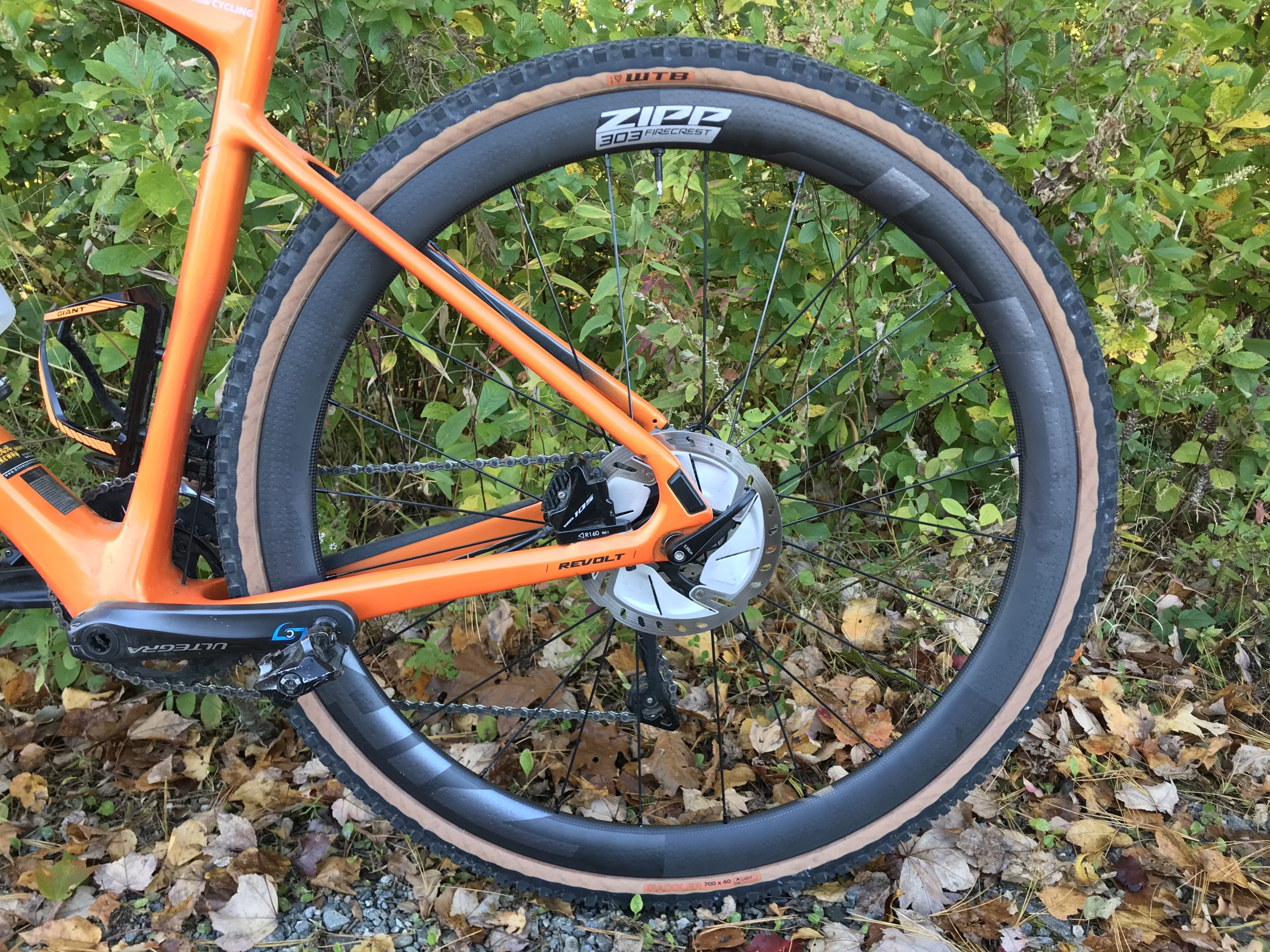 Stiffness is a plus on these 303 Firecrests. Notably, stiffness wasn’t always a characteristic strength on previous Firecrests and isn’t on other Zipp wheels if you are a heavy rider or putting a lot of watts into them. This greater stiffness also shows up on gravel climbs, where the new 303 Firecrest disc excels.

The hubs also perform well on unpaved roads. They engage relatively quickly and provide the acceleration you frequently depend on riding gravel roads with their regularly changing pitches and surfaces.

Zipp uses their own ZR1 hubset on this Firecrest, a 6-pawl, 6 degrees of engagement affair. This is also a new model for them, something they seem to regularly do with hubs every few years. Because of that, it’s frustratingly hard to know how they’ll hold up over time.

On paved alpine climbs, I found the 303 Firecrest Zipp to be nearly the equal of the best lightweight disc wheels like the ENVE 3.4 disc and 3.4 AR disc and the Bontrager 37 RSL (reviewed here). It wasn’t as snappy as the ENVEs or as quick as the Bontrager, but it was steady, strong, and felt like nearly every watt of power I put into the wheels went right to the road.

At a measured 1383 grams with the Shimano/SRAM 10/11-speed compatible freehub on the wheelset I tested, its light weight (about 30 grams heavier than the Bontrager and 40-50 grams lighter than the ENVEs) clearly makes it one you’d want to join you going up long, steep climbs.

On flatter paved roads and rollers, some of the differences between the Zipp 303 Firecrest disc and more expensive ENVE 3.4 AR disc and far more expensive Zipp 303 NSW road disc wheelset came out. The ENVE and NSW are more comfortable and roll smoother on paved roads. And the NSW is clearly faster and holds its momentum far better than the Firecrest (and ENVE).

On paved roads, I used Zipp’s Tangente Speed Road Tubeless tires, ones I’ve found to be among the best tubeless tires, I did A-B and A-B-C comparative testing of these three wheelsets. The Firecrest and ENVE with their 25mm internal width rims got 28mm Tangentes inflated to the same pressure while the 21mm internal rim width NSW was shod with 25mm Tangentes inflated to the appropriate pressure for their widths and my weight.

Each of these wheelsets uses different hubs and layups. That might explain the comfort differences. 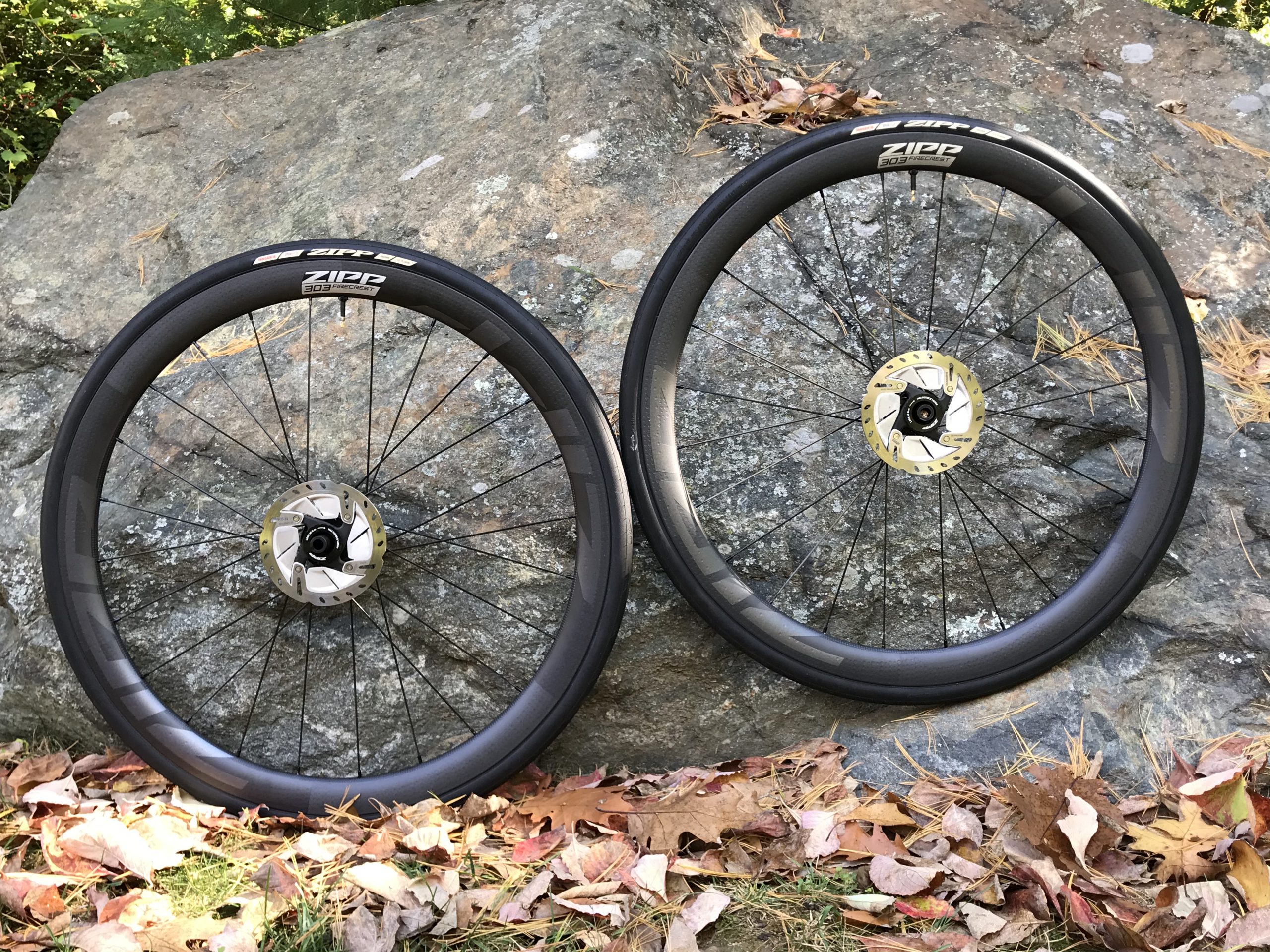 The NSW and ENVE rim and Tangente Speed Tubeless combinations easily passed the 105% outside rim width to tire width ratio target for optimal aero performance while the narrower outside width of the Firecrest put it slightly under 100%.

While I don’t expect top-end aero performance from a 40mm deep wheelset, the 30mm outside width of the Firecrest vs. the 32mm measurement of the ENVE 3.4 AR front wheel might explain the speed difference I felt in its ability to hold speed. Unfortunately, none of the other 28mm tubeless tires suitable for hookless rims that I mounted and measured on the Firecrest – Bontrager R3 Hard-Case Light TLR, Schwalbe Pro One TL, Specialized S-Works Turbo RapidAir – got me past 102%.

But at $1900 and used primarily for gravel and alpine climbing, the Zipp Firecrest 303 disc wheelset is a great option for those riding purposes and a good value. And, for what that’s worth, I’m kind of partial to the new logo too.

You can order it through these links to recommended stores Performance Bike, Amazon, Wiggle, and Tweeks Cycles.

This site is independent, ad-free, and reader-supported. When you buy through links on our site, we may earn an affiliate commission that helps us cover the costs to bring reviews and other free content to you. Read more about us.

First published on October 18, 2020. Date of the most recent major update shown at the top of the post.