With the introduction of Wahoo’s POWRLINK ZERO, Speedplay pedal loyalists finally have a power meter to call their own.

Wahoo has developed, tested, and brought the POWRLINK to market just a couple of years after buying the Speedplay line, a very short time in power-meter-years. If it weren’t for supply chain issues, Wahoo claims they could have released the POWRLINK last summer as they originally announced.

The idea of a power meter built into any kind of pedal started at least 8 years ago when Brim Brothers developed a promising one integrated into Speedplays. They got all the way through a first production run that would have fulfilled their oversubscribed Kickstarter campaign commitments but ran out of money trying to solve the variable accuracy of the units coming off their manufacturing line.

Since then Garmin and Favero have developed power meters that were made first for LOOK and then Shimano road pedals and SRM has partnered with LOOK to make a LOOK road pedal model. Garmin and SRM have also proven the technology on more demanding off-road surfaces.

Speedplay pedals with their two-sided clip-in platform, 0-15 degrees of float settings, and multiple spindle lengths give bike fitters a wide range of solutions to improve a rider’s pedaling efficiency and comfort while reducing their joint stress and pain. For all of those reasons, it’s a platform that many including me have migrated to. And for those who also want to quickly transfer their power meter between bikes, POWRLINK adds power to the pedals we prefer.

Wahoo had already overhauled the design of the Speedplay pedal internals by eliminating the prior model’s need for regular and stupidly messy lubrication. This made an elegant pedal design simpler to maintain and one of the best road pedals compared those from Shimano and LOOK.

After buying Speedplay, Wahoo moved pedal production to a new facility under their management to improve product reliability. Pedals I’ve ridden for the last year with that design and from their own factory have performed flawlessly.

Indeed, similar to Garmin’s initial design and Favero’s proven one, the POWRLINK power electronics sit in a pod on the spindle between the crank arm and pedal itself. 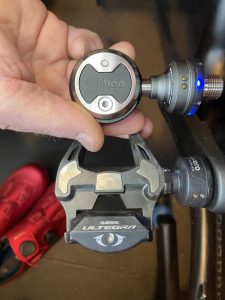 The POWRLINK shares a similar pod design approach with the Favero

So how does the POWRLINK perform?

In the short time since I received these power meter pedals, I’ve done four trainer rides including endurance, over-unders, and a couple of simulated, surgey/spikey outdoor simulated rides on variable terrain totaling about 5 hours. On all of these rides, I compared the dual-sided POWRLINK to the power recorded on my Wahoo KICKR smart trainer and my single-sided 4iiii crank arm.

Bottom line, the dual-sided POWRLINK performs very well. Independent testers DC Rainmaker and GPLama who have had test units for 6 and 12 months respectively both summarized the accuracy as “spot on.”

By “performs very well” I mean more than good enough for the kind of training and racing all but the fussiest roadies could want.

While I’ve got the receipts… eh, comparative power data files to reach that conclusion, I’ll leave the in-the-weeds discussion of the insignificantly small differences between the POWRLINK and other power meters to those I’ve linked you to above who do that kind of data dissection the best and did it over many months both inside and out.

At the same time, I’m relieved. Even some power meter veterans like SRM in their partnerships with others haven’t always gotten it right.

Differences between power meters of all types shown in the accuracy, consistency, drop-outs, top-end power, temperature compensation, communication to your head unit, and other measures of the best power meter models from the leading companies are nearly non-existent or so small that they shouldn’t matter to almost all road cycling enthusiasts.

Power meters are actually a mature market and technology so you really can choose between them based on price, use case (e.g., transfer frequency, crankset type), and preferences (e.g., battery type, single or dual-sided measurements).

The POWRLINK has an auto-calibration feature that will save you from pushing buttons on your bike computer and give you one less thing to bother with at the beginning of a ride. You stage your bike similarly to the way you would with manual calibration. Set your bike outside for a minute or so at the temperature that you’re going to start your ride and before clipping in. The calibration then happens automatically.

Yes, there are unique pedal metrics that Garmin and Favero power meters offer that Wahoo’s doesn’t. But, I don’t think these are relevant to all but the super-nerdy, can’t-get-enough-data types among us. And even for them, no coaches, fitters, or physios I’m aware of have published anything that would suggest you change your training or fit or anything else because of what those metrics show you.

If you’ve decided to go with a power meter pedal instead of a crank arm or spider one (here’s how to pick between them and the pros and cons of each), having an option that matches the kind of pedal platform you prefer is a big benefit.

If you don’t have a pedal preference or don’t need to use one type of pedal to get the best bike fit, I see just a few reasons to choose between the power meter options and how the POWRLINK stacks up.

Frankly, I think any of those are plenty long enough. I make it a habit of charging my electronic groupset at the beginning of each month and charge my power meter pedals at the same time. And if you don’t have an electronic groupset, you are undoubtedly charging your bike computer 2x-4x/month which could serve as a prompt to also charge your power meter, lights, or other onboard electronics. 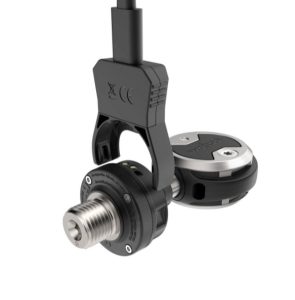 Perhaps more important, Garmin uses replaceable batteries, and not common ones, while Favero and Wahoo have rechargeable batteries in each pod. While a bit more fiddly than the Favero Assioma, the Wahoo POWRLINK also uses a magnetically attaching, bending clip that locks onto the top of the pod and connects using a USB-C cable on one end and the standard USB-A to connect to your power source.

* User Interface – Garmin, Favero, and Wahoo use relatively simple smartphone apps to set up their power meters and update the firmware. While it’s not a huge difference in this case, Wahoo seems once again to have made the whole interface quite simple.

* Price – Wahoo has priced the POWRLINK ZERO similarly to the Garmin Rally road pedals, both of which are a good deal more expensive than the Favero.

And for the single-sided ones

Note that Favero doesn’t seem to restrict its retailers from setting their own, often lower prices for their power meters while Garmin and Wahoo appear to keep their retailers’ prices in line with the “recommended” retail prices you see above.

With no difference in performance, Favero continues to be the clear value amongst power meter pedals. And when you can buy a dual-sided LOOK or Shimano power meter from Favero at essentially the same price as a single-sided one from Wahoo or Garmin, well it kind of makes for an easy choice even if most enthusiasts don’t need the added accuracy of a dual-sided unit as consistency is the more important measure.

While I’m not sitting in the Wahoo strategist’s chair, their pricing leads me to a few conclusions. It would appear as though they are focused on the Speedplay user rather than trying to bring those who currently use Shimano pedals over to the Speedplay platform if they decide they want a power meter in their pedals instead of on a crank arm or in their crankset.

Or, it just may be that Wahoo is waiting to see what kind of reception they get for their pedals and balancing that against supply chain challenges most companies are dealing with these days. After all, it doesn’t make sense to drive up demand with more competitive pricing if they can’t deliver the units to support it.

Also notable is that with the POWRLINK, Wahoo is continuing to reduce the range of Speedplay pedal options. After Wahoo acquired Speedplay and moved production, they eliminated several less popular but more distinct pedal models they acknowledged Speedplay was losing money on. They stuck with four road-specific models that use the same pedal body and differ only by using either titanium, stainless steel, or chrome alloy spindles.

The POWRLINK ZERO comes only with a stainless steel spindle and in a somewhat standard 55mm Q-factor length rather than the 53mm, 56mm, 59mm, and 65mm lengths they offer in their Speedplay ZERO pedals without power meters. While you can adjust the cleats 5mm either way from center to get an effective 50mm to 60mm Q-factor, this may further reduce their potential user base both among those who adopted the platform for improved fit and those who fitters might have recommended Speedplays in the future to improve rider fit and biomechanics. 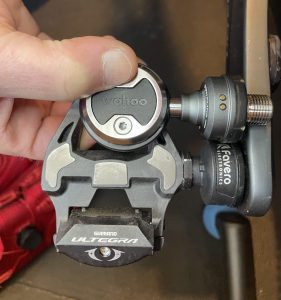 It’s hard to know how big a market this is or whether Wahoo looked at it and decided it isn’t a profitable one. However, fitters I’ve talked to estimate that over half the riders they’ve worked on need spindles longer than the 53-55mm Q-factor offered by the POWRLINK and most other power meter pedals to reduce the strain on your knees from the bow-legged shape created by using those that are too short.

Basically, if you’re taller than 5′ 10” or your hip flexors have tightened up after years of sitting in an office chair all day, you likely need at least a 60mm long effective length from the combination of the spindle, a spacing washer or two, and appropriate cleat placement. And if you’ve got large feet, say an EU size 46 or longer shoes, you’ll likely need the wider Q-factor to keep your heels from rubbing against your chainstays during a hard effort.

If you are one of those that has to deal with those issues, the Favero DUO-SHI or Shimano dual-sided version comes with a 65mm Q-factor and at a far lower price than both the POWRLINK and Garmin Rally models that have the narrower Q-Factor. By moving your Shimano cleats, the Favero DUO-SHI Q-factor can range from about 60mm to 70mm.

But if you are a committed, standard spindle length Speedplay user that wants to add power to your pedals, the POWRLINK is now there for you.

First published on February 23, 2022. The date of the most recent major update is shown at the top of the post.